A scruffy looking kitten gives herself no chance of being adopted, but for some people looks are not important.

Button Text
‘Chanel’s Story,’ is about an ugly shelter kitten who gives herself no chance at being adopted.  After many disappointments, she discovers that there are people willing to look beyond fur deep.   Chanel’s poignant and amusing story shines a well deserved spotlight on animal shelter adoptions and the importance of responsible pet ownership.

Beyond the timely message of overflowing shelters, ‘Chanel’s Story’ is, at the heart of it, about the blessing of acceptance.   Not just a human’s acceptance and love for a cat; but also a cat’s special love for the owner who saved her.

In ‘Queeny’s Diary,’ this tiny, Ragdoll breed kitten is left in the care of friends while her owners go away on vacation.  Her diary entries describe numerous adventures and misadventures when she finds herself alone in a household full of other older and eccentric cats.

Buy it now on Amazon
For a while I lived in a shelter.  It was a place filled with dogs and cats and I was there all by myself, even though I was just a baby kitten.

Then one day my friends and I were put in cages, loaded into a car, and transported to a pet store.

On the way, I saw a sign that read “National Pet Adoption Week”.

It’s not unusual for pets to be taken to pet stores, but that is just for a day or for a weekend.  This week, however, cats, dogs and other small pets will be taken to pet stores all week and can be adopted at a reduced fee.  They do this whenever the shelter gets too full you see, in an attempt to have as many pets adopted as possible.

Being adopted by a family would be nice.  While I was in the cat shelter, I saw plenty of people come and go, but I was never chosen.  I did not have much hope that today would be any different.

People walked past the cages, saying how cute and adorable the other cats and kittens were, but they never said that about me.  If anything, they frowned at the sight of me.

I saw them leaving, cradling their new furry bundle of joy in their arms, while I stayed behind.

Nobody wanted me.  Nobody even wanted to rub my little head, let alone pick me up and hold me.

I am not cute or adorable, you see.  I am ugly.

My fur is not short and smooth like Mona’s; it is long and sticks out at angles.  My color is not black like Suzy’s, white like Ceasar’s, cream like Mike’s, or even striped like Angela’s.  It is a mixture of grey and cream, patched all over my face, body, legs and tail.  I’m the kind of cat that people look at once, then turn away quickly.

I was not sure why they brought me along to the pet store.  Nobody was going to take me anyway.

To make matters worse, I was sharing my cage with Lisa and Lynette, pure white twins.  They were the most beautiful kittens I had ever seen and believe me, I have seen a lot of kittens during my time here in the shelter.

The twins were so adorable when they played.  Come to think of it, they were even adorable when they were asleep. So, how can an unglamorous little girl like me compete?   There’s another problem; they tell me that when I sleep, I sometimes snore.  Do you know anyone who wants an ugly kitten who snores?

A lady came in and I started wondering, even hoping...

She might look at me, I thought.  But, no, she walked right past me as if I were invisible.

Instead, she looked at Sybil, a black Persian.

I knew right away that Sybil was going to get lucky.  The lady was holding her and kissing her, and that pretty much sealed the deal.

Bye, bye Sybil, I waved, have a nice life.

Another lady came in, with a little girl.

They also walked right past me.

“May I help you?” asked Paul, our caretaker.

“We’re looking for a cat,” the lady replied.

“You have come to the right place,” Paul smiled.  “As you can see we have lots of cats and kittens.”

Paul took them to where the adult cats were housed.  They did not give themselves much of a chance to be adopted either.  Very few people want an adult cat.   Most of them prefer a kitten.  I wonder why?

If you think about it, how long is a kitten a kitten?  A few months and then it is a fully grown cat too.

Anyway, next there was a man.

The man pulled a face.  “Yeah, but not in this one; she’s not at all pretty.”

Jeez, thanks pal, I thought, you’re no picture yourself.

The nerve of some people; I knew that I wasn’t pretty, but to actually come out and say it!

After that I was so depressed I decided to take a nap.

I saw lots of empty cages, so a lot of my friends were adopted.  There were still plenty of occupied cages though, some with two or even three cats in them.

The day was young and chances were that a lot more cats would go to a new home before the day was over; or shall I say before the week was over, because remember, it was National Pet Adoption Week.
Review


Have you ever wondered what your cat or kitten is thinking?

Well, this lovely book is written as the diaries of two kittens.

Chanel is a poor, ugly abandoned kitten, who just wants to be loved, but is always overlooked by visitors to the shelter. Then on Pet Adoption Week, she is taken to a pet shop. As the other cats are re-homed, she sits, waiting for that special person to come along and love her. Find out if her dream comes true and what happens by reading her diary.

The second kitten is called Queeny, she’s a beautiful pampered Ragdoll.  Her owners leave her with their friends whilst they go on holiday, but she has to learn how to interact with the other six cats at the house! Find out how Queeny gets on, and discover how she feels when her owners return, in this second delightful diary.

A beautiful book, thoughtfully written, which encourages children to think about what their pets may be thinking, and, how they might react to everyday situations. 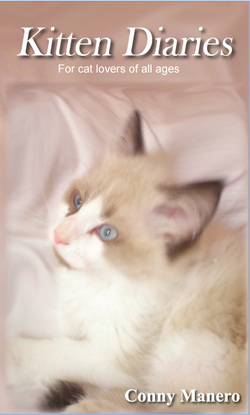